NEXT UP!! TAXI PATA PATA BAND are at HF UNITY DAY IN RAVENSCOURT PARK ON SUNDAY JULY 21st. ROLL UP!! ROLL UP!! 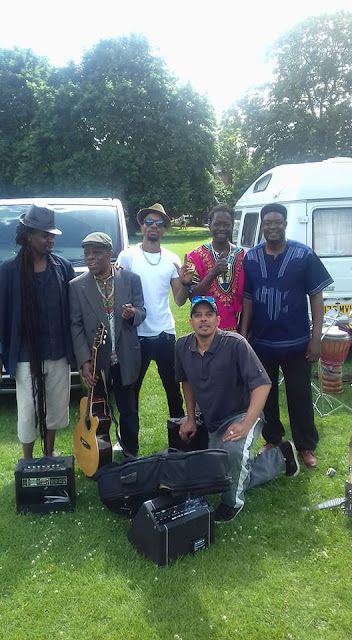 Very successful season of Paint with the Sound of Drums completed with more to come soon - watch this space - photos being UPloaded soon, meantime scroll for the archive poster! 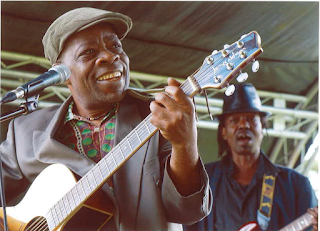 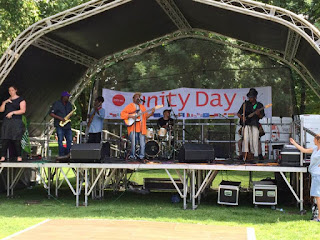 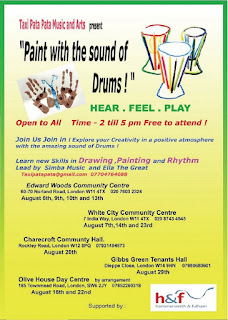 NSIMBA FOGGIS and TAXI PATA PATA played a big part in this year's HF Arts Fest  (HF-ArtsFest.com) having contributed drum workshops with the Big Red ArtsFest Bus and with an upcoming great performance at the UNITY DAY in RAVENSCOURT PARK, W6 on SUNDAY JUNE 10th  (they also took part in 2017 and 2016!) 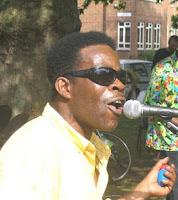 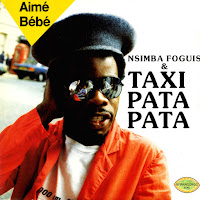 Yes! Nsimba Foggis and Taxi Pata Pata - 'combine the beat of the bush and the heat of the city' Melody Maker back in the day  'As sweet a voice as you would ever hope to hear' The Wire 'Best African Band in Britain' BBC Radio 1 'No Festival Complete without Taxi Pata Pata' The Voice WOM@TT Best of British Award .... Best use of Music in Advertising Montreux Golden Award ,,,, 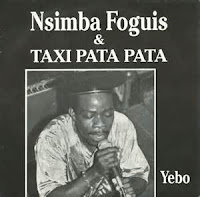 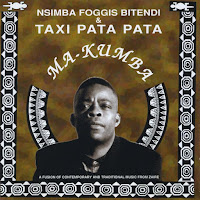 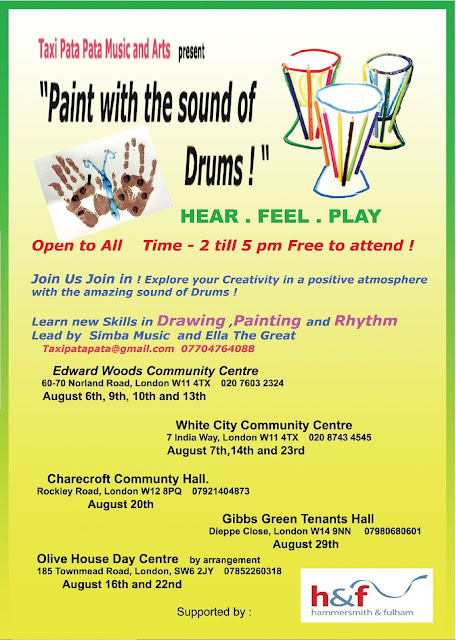 A  NEW SERIES OF PAINT WITH THE SOUND OF DRUMS IS TAKING PLACE THROUGHOUT LBHF THROUGHOUT AUGUST - SEE THE FLYER ABOVE AND THE SPECIAL WEBSITE PAGE IN THIS SITE! UP!!!

In May/early June 2017  the Paint with the Sound of Drums workshops were rolled out again in West London to involve older people through the auspices of Community Champions and HF Arts Fest in very successful workshops. It is a wonderful combination encouraging collaboration as well as enhancing personal confidence and hand eye coordination, Bookings are OPEN for more contact as above!

THIS POSTER DESIGNED BY ELLA GOLT IS FOR A VERY SUCCESSFUL WORKSHOP SERIES AND PHOTOS WILL BE UP VERY SOON. MORE SESSIONS ARE BEING PLANNED! 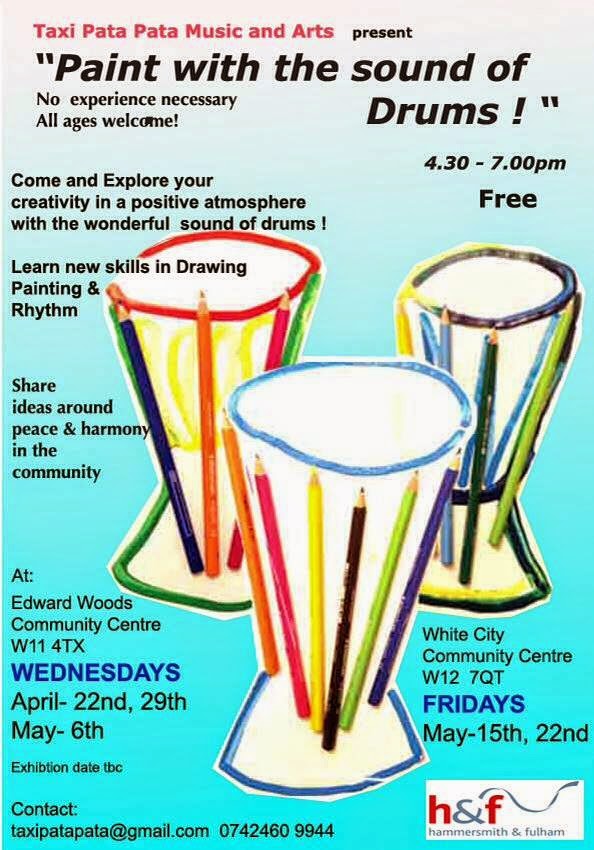 MORE NEWS OF PAINT WITH THE SOUND OF DRUMS SOON!!!

This wonderful workshop series began on WEDNESDAY APRIL 22nd and ran very successfully on all the dates on the flyer - open to all - a brilliant opportunity for self expression, learning new skills , flexing already present skills whilst having great fun! Come We ALL GO!

Ella Golt who has her own page on this site ... Visual Artist based in London with a wealth of workshop leading experience at UEL, Rosebowl Hoxton,     Arty Party, Chisenhale Dance Studios, Albert & Friends International Youth Circus Arts Festival ...